Trading in paid subscribed shares (“BTA”) on the Nasdaq First North Growth Market continues under the short name CMH BTA until the Rights Issue has been registered with the Swedish Companies Registration Office (sw “Bolagsverket”), which is expected to take place towards the end of January 2023. After that, the BTA will be converted into shares.

Allotment of shares subscribed without the support of subscription rights has taken place in accordance with the principles stated in the prospectus compiled in connection with the Rights Issue and which was published by the Company on December 21, 2022. Notification of allotment is made through a settlement note that is sent by mail to each subscriber. Allotted shares must be paid in accordance with the instructions on the settlement note.

“We are very satisfied with the outcome of the rights issue and would like to thank all our shareholders for their confidence in Chordate. We see the fact that so many have chosen to continue investing in the Company's journey towards an exit as an unusually good rating of the strength of Chordate's offer, especially under the current stock market conditions. Now we can increase the speed in the work to reach out to more people in our prioritized markets.”

This information is information that Chordate Medical Holding is obliged to make public pursuant to the EU Market Abuse Regulation. The information was submitted for publication, through the agency of the contact persons set out above, at 2023-01-11 18:15 CET. 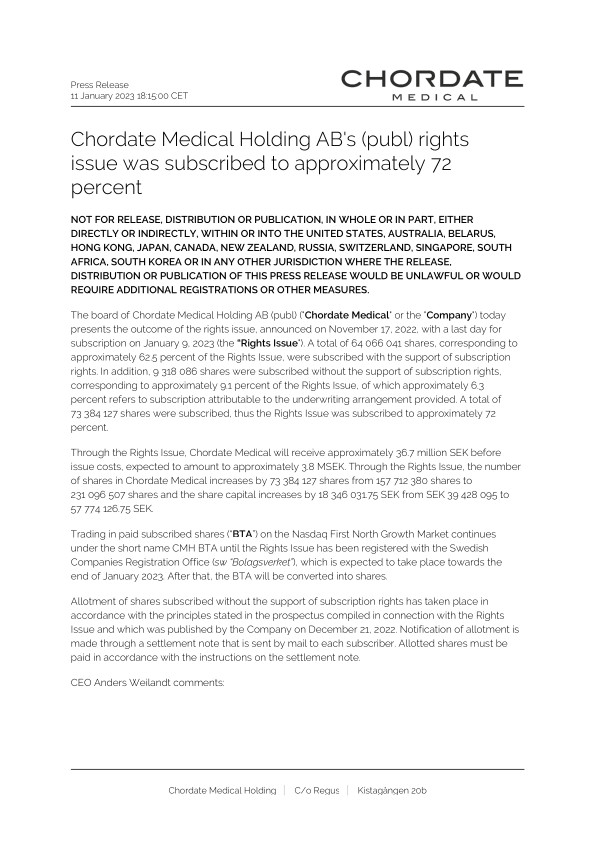