Chordate Medical ("Chordate", the "Company") has entered into an agreement with MTIGER GmbH, Germany, to introduce the company's product for preventive migraine treatment, K.O.S, on the German market. Following a detailed market analysis carried out by MTIGER, the agreement runs for an initial period of one year.

MTIGER will introduce the K.O.S treatment to leading neurologists in Germany on behalf of Chordate in both the private and public healthcare market. The ambition is also to resolve questions regarding reimbursement opportunities for the treatment. MTIGER will locally support the German part of the follow-up study PM010 in a small number of clinics.

According to a recently published analysis, the prevalence of migraine is 14.8 percent for women and 6 percent for men in the German population. According to the same analysis, 1.2 percent, approximately 1 million people, meet the criteria for the diagnosis of chronic migraine in Germany.

Chordate has recently completed a clinical study of preventive treatment for chronic migraine in which 97 German patients were included and treated at five neurology clinics. As previously communicated, a subgroup analysis of the German part of the study will be presented on September 8-11 at the neurology congress MTIS 2022 in London.

“During the analysis and stratification work of the German migraine market, we have for a long time gotten to know MTIGER's competence and network. The German healthcare market is extensive, but at the same time both complex and fragmented. Just like for the markets in the UK, Israel, and the gulf area, with this agreement we want to establish a collaboration with market experts who works focused and dedicated – under our management”, says Anders Weilandt, CEO of Chordate.

About Chordate
Chordate Medical Holding AB (publ) is a medical technology company that for over ten years has developed, patented and CE-marked a new neuromodulation treatment technology for chronic nasal congestion (rhinitis) and chronic migraine. The company offers its product via distributors to clinics and hospitals in the Nordics, Germany, the UK, Israel, and Saudi Arabia. Chordate Medical's share is listed on Nasdaq First North Growth Market Stockholm (ticker: CMH). Read more at www.chordate.com/en/ 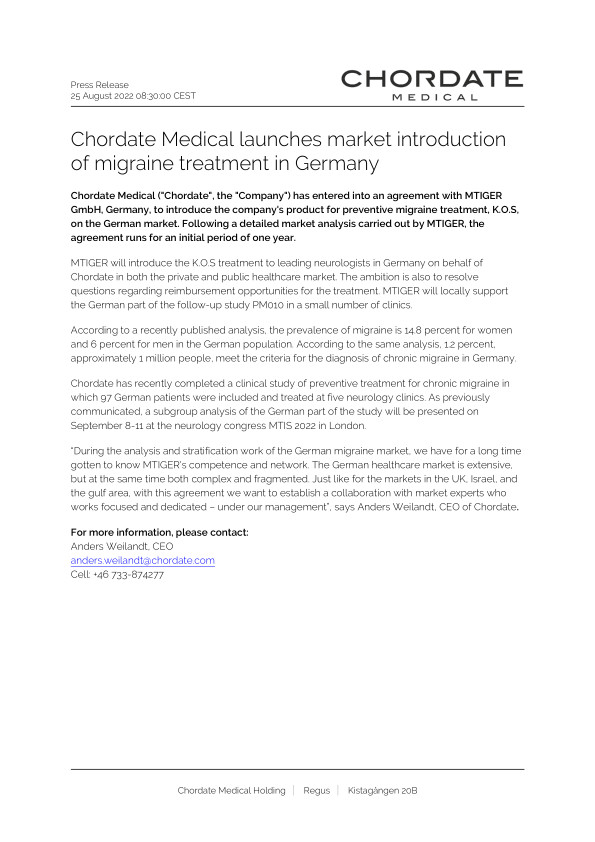