Chordate Medical Holding (publ) is opening a representative office in Riyadh, via Chordate Medical AB, to continue to grow in Saudi Arabia and expand its operations to the other countries in the GCC (Gulf Cooperation Council). The general manager of the office will be Alain Durante, who has almost 20 years of sales and marketing experience in medical technology in Saudi Arabia.

"The ongoing implementation of insurance compensation in Saudi Arabia has the potential to lead more quickly to corresponding compensation codes in other countries within the GCC as there is an established cooperation between them. We want to build on our market position for rhinitis in Saudi Arabia as early as possible and expand it to other countries in the immediate area. Saudi Arabia accounts for 55 percent of the medtech market in the Gulf region according to external analyzes, so it is natural that we now establish a local presence there", says Anders Weilandt, CEO of Chordate Medical.

Saudi Arabia is one of the markets that Chordate Medical has selected to prove the market potential of K.O.S treatment in order to enable growth and attract buyers of the company. In November 2020, private health insurance companies in Saudi Arabia approved the insurance code that can be used by private care providers in the country when treating with K.O.S for chronic rhinitis, and at the end of 2021, the first insured K.O.S treatment was carried out in the country.

"With the establishment of a representative office in Riyadh, we are taking the next step to grow further. We see that we have the same potential in other markets in the GCC, such as Qatar, Kuwait, Bahrain and the United Arab Emirates".

The registration process for the establishment of the representative office is underway and can take up to six months. Such an office has a special status in Saudi Arabia because it does not handle trade or transactions, and in Chordate's case it will consist of Alain Durante in the role of General Manager.

"Alain has been responsible for the successful work so far as an employee of our distributor Al Mothihel Trading in Jeddah. In his new role, Alain will continue working with Al Mothihel but also gradually find new opportunities for Chordate in the region", says Anders Weilandt. 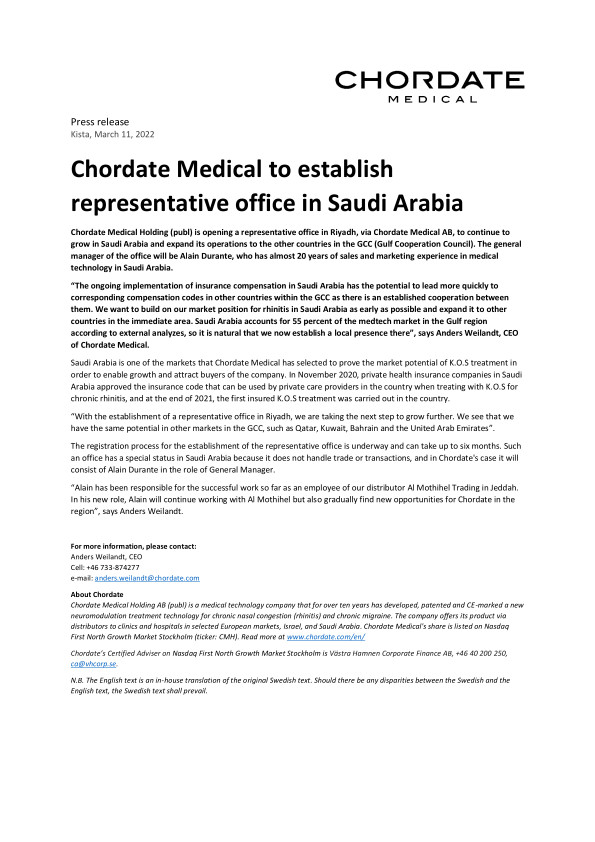