Independent scientific article published on the K.O.S treatment for rhinitis

A clinical study conducted by a group of Italian researchers on K.O.S treatment for rhinitis from Chordate Medical Holding AB (publ) ("Chordate") has resulted in a published article in the scientific journal American Journal of Surgery and Clinical Case Reports. The research group is completely independent in relation to Chordate, and the study was initiated and funded internally.

The study, an open comparative observational study, was conducted between December 2018 and July 2020 with a total of 80 patients aged 18-87 years evenly distributed between women and men. Patients were divided into two equal groups, one of which was treated with one (1) K.O.S. treatment, and the control group was treated with standard nasal spray (mometasone furoate, eg Nasonex®).

The measurements were made partly before the first treatment, partly 45 days after K.O.S treatment – respectively start in the study for the control group.

The study can be read in its entirety here: https://www.ajsccr.org/article-details.php?tit=AJSCCR-v4-1670

The article's conclusion reads:
K.O.S treatment is a safe and mini-invasive procedure for the treatment of NAR symptoms, well accepted from the patients and with a promising improvement of QoL, as assessed with the improvement of I-NOSE and SNOT-22 score after the K.O.S application on patients. The procedure can be administered on an outpatient basis without the need for general/local anesthesia or any premedication and it presents an efficacy almost comparable to that of conventional medical therapy.

"It is very gratifying that there are research results that have been initiated and funded completely without our participation or knowledge. In this case, it is particularly exciting to read about a study that includes patients who are far much older than 65 years and who report such positive improvements in quality of life. As far as we know, this is also the first time someone has studied the effects on the sense of smell – and with such positive results", says Anders Weilandt, CEO of Chordate.

Information:
This disclosure was submitted for publication, through the contact person below, on January 31st, 2022, at 08:45 am CET. 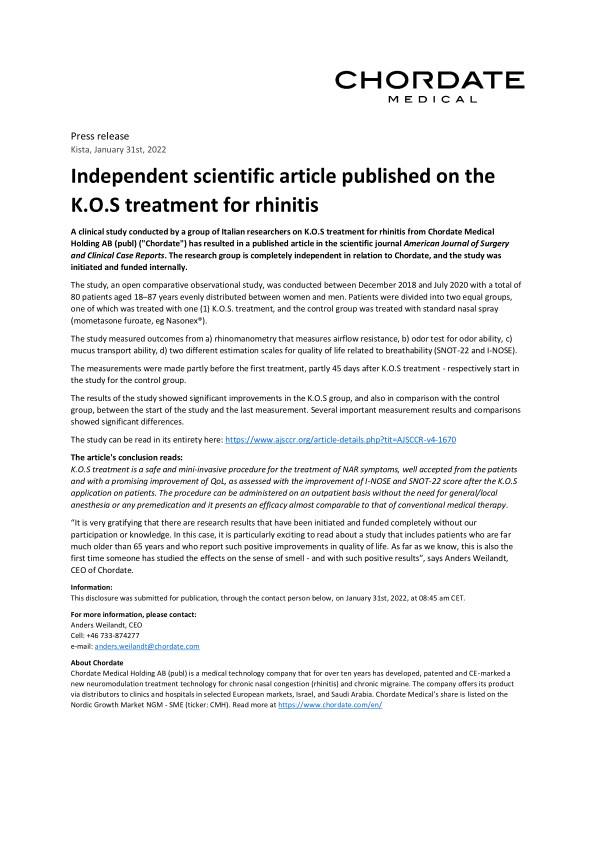