The poster reveals that the subgroup analysis of the 46 German subjects receiving active K.O.S-treatment demonstrated a significantly reduced number of monthly headache days (MHD) with moderate to severe intensity from baseline, when compared to the 46 subjects receiving the sham treatment. The difference shown by the least square means (LSQ) of the ANCOVA model between the 4-week baseline period and treatment weeks 3-6 was -2.52 MHD (CI95%=[-4.52; -0.52], p=0.0140 and by non-parametric, stratified van Elteren test p=0.0092). The 4-week follow-up period results – after ending six weeks of stimulation – showed a reduction in LSQ of -2.70 MHD (CI95%=[-4.73;-0.68], p=0.093; van Elteren test p=0.0151), demonstrating a sustained improvement during the observation period.

Response defined as ≥30% reduction in MHD with moderate to severe intensity from baseline was achieved in 41.4% of the subjects receiving active K.O.S vs. 14.9% in the group receiving sham treatment. The treatment was also reported as well-tolerated without severe adverse events.

The authors concludes that this trial thus far indicates that K.O.S is an effective and safe option for the preventive treatment of chronic migraine. And further that as the K.O.S is a non-pharma alternative it would constitute a valuable expansion of the current therapeutic arsenal, without the significant risk of unwanted side effects commonly seen with other preventive treatment alternatives.

“It is remarkable to learn about such stunning effect from the German part of the PM007 study. The demonstrated level of response with K.O.S is also remarkable. This will indeed be a great support for our marketing and sales ambitions. The opportunity to make this subgroup analysis presented itself as the German clinics completed their work early. Our near-term task is now to compile the data from the completed study, and to get it published in its entirety”, says Anders Weilandt, CEO of Chordate.

About the PM007 trial

This randomized, sham-controlled, double-blind, multicenter study was conducted at five neurology clinics in Germany and four in Finland. The study enrolled 132 subjects and was designed to evaluate the efficacy and safety of the K.O.S-treatment. Primary endpoint was to detect mean change from baseline (4-week screening period, 4-week follow-up period) in monthly headache days with moderate to severe intensity, following weekly treatments for six weeks. Fifty percent of the subjects received active K.O.S-treatment from the S211 investigative device, and fifty percent received a validated sham/placebo treatment from the same equipment. The study enrolled subjects with diagnosed chronic migraine (≥15 days/month of headache, whereof >8 days with migraine) and saw the last subject leaving the study at the beginning of August 2022.

About Chordate
Chordate Medical Holding AB (publ) is a medical technology company that for over ten years has developed, patented and CE-marked a new neuromodulation treatment technology for chronic nasal congestion (rhinitis) and chronic migraine. The company offers its product via distributors to clinics and hospitals in the Nordics, Germany, the UK, Israel, and Saudi Arabia. Chordate Medical's share is listed on Nasdaq First North Growth Market Stockholm (ticker: CMH). Read more at www.chordate.com/en/

This information is information that Chordate Medical Holding is obliged to make public pursuant to the EU Market Abuse Regulation. The information was submitted for publication, through the agency of the contact persons set out above, at 2022-09-08 08:30 CEST. 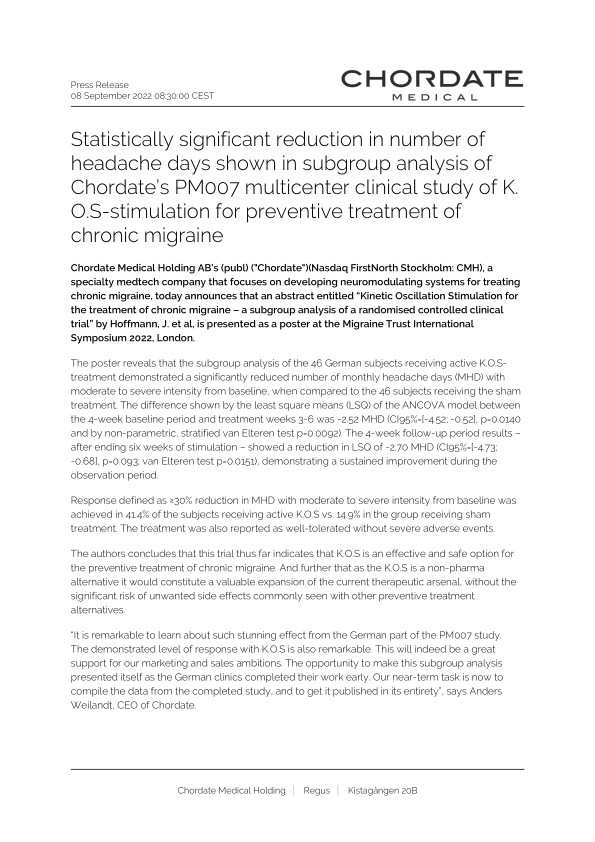