Chordate Medical Holding AB (publ) ("the company, or "Chordate") is a Swedish medical technology company that has developed and patented an innovative treatment method: K.O.S. The company's existing EC-certificate for K.O.S has now been granted an extension with the indication Chronic Migraine and the intended use: Preventive treatment of chronic migraine in adults over 18 years. The CE marking means that the K.O.S treatment meets the clinical efficacy and safety requirements for in the European Medical Devices Directive for the new indication. The approval allows Chordate to commercialize the migraine treatment within the EU. This CE marking comes one year ahead of the company's preliminary plan.

The CE mark for preventive treatment of chronic migraine has been granted after examination of the medical efficacy and safety demonstrated by results from the interim analysis of the ongoing clinical patient study in Germany and Finland – which was the basis for the application submitted in May 2019. The CE mark applies to the current regulations for medical devices: MDD 93/42/EEC. Chordate has also been granted an extension of the company's CE marks until May 2024, including rhinitis.

"Obtaining a CE mark for the migraine treatment has been our main objective and something we have worked several years to achieve, by two alternative processes. However, the most probable scenario was that we would have needed the complete results from the current clinical study, to apply under the new EU regulation MDR, that will replace MDD as of 2021-05-26. Instead, the CE mark is now given within MDD which we considered less likely, i.e., on the interim results from 2019. The announcement is without comparison the most important event in Chordate's history", says Anders Weilandt, CEO of Chordate Medical.

The CE mark now obtained also means that Chordate has achieved the desired market position one year earlier than projected.

"Of course, the ongoing migraine study will continue until it is completed, but the significance of the study has now shifted from being needed to obtain a critical approval to develop the market, to becoming a good sales support and an academically published proof of the clinical effect. By this, we are instantly taking a big step forward strategically, enabling us to establish sales in our selected markets in Europe", says Anders Weilandt, CEO of Chordate Medical.

The K.O.S treatment is since long CE marked for the treatment of chronic nasal congestion, rhinitis, which has also been introduced in selected EU markets and Saudi Arabia.

About the treatment method K.O.S

K.O.S, Kinetic Oscillation Stimulation, is a preventive neuromodulation treatment method for chronic migraine and chronic rhinits, with few or no unexpected side effects. K.O.S uses vibrations to stimulate the nerves in the mucous membranes of the nose, which is believed to balance the response of the autonomic nervous system with a positive effect on, for example, migraine.

About the market for the treatment of migraines

The proportion of the population who have migraine globally is reported to be 15-18 percent of women and 6-8 percent of men. Chronic migraine, which affects about 2 percent of the population, means having a headache more than 15 days a month with at least eight days of migraine episodes. Sales of migraine pharmaceuticals is estimated to reach SEK 84 billion in 2026, with annual growth of just over 10 percent in the seven major markets.

Chronic migraine is usually treated with different types of medication. Many patients experience a fading effect over time and need to change medication, or that unwanted side effects no longer can be tolerated. Another type of treatment is injections with OnabotulinumtoxinA (Botox) in the face and around the head. The treatment is carried out at the clinic about four times a year and each treatment involve about 30-40 injection sites. The market for botox injections for migraines is expected to amount to approximately SEK 7 billion in 2023.

Patients treated with botox for migraine is a priority target group for the K.O.S treatment. Migraine patients who choose botox often pay privately for the treatment in many markets. Chordate expects to be able to gain market share in that segment more quickly, especially since K.O.S has few or no unexpected side effects compared to botox.

About Chordate
Chordate Medical Holding AB (publ) is a medical technology company that for over ten years has developed, patented and CE-marked a new treatment method through nerve stimulation for chronic nasal congestion and chronic migraine. The company sells its product system including treatments via distributors to clinics and hospitals, which in turn treat patients. Chordate Medical is listed on the Nordic Growth Market NGM – SME (ticker: CMH). Read more at www.chordate.com. 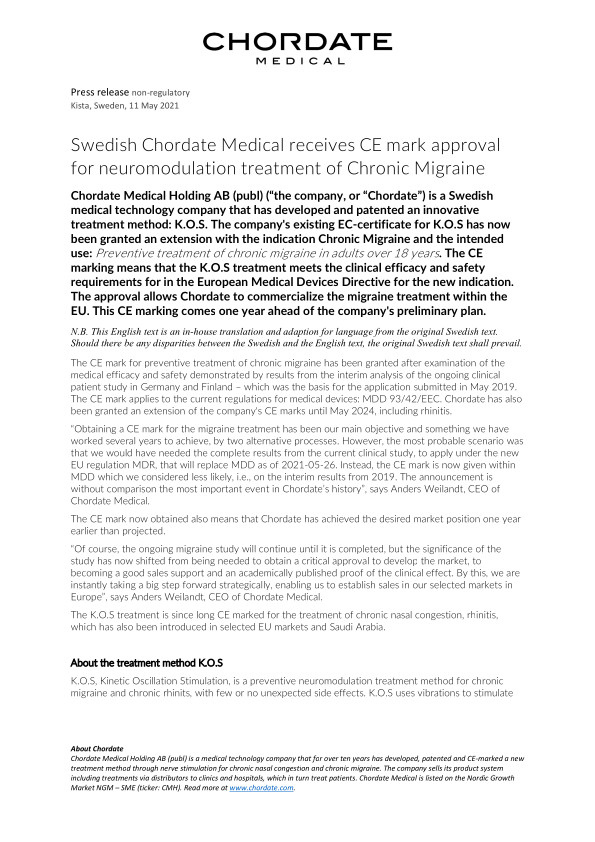